The Air Force Big Band, The Guards Combo and Souls of Women, The Conscript Band of the Finnish Defence Forces’ Showband 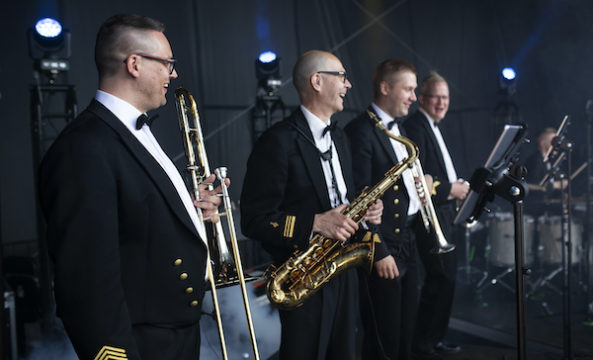 We welcome you to celebrate the Flag Day of the Finnish Defence Forces at Kansalaistori, Helsinki!

The festivities begin with the Defence Forces’ parade at 12 o’clock, marching from the Senate Square to Musiikkitalo. Themed Readiness at all times – Finnish Defence Forces as a safeguard for Finland, the parade will be participated by units from the Army, Navy, and Air Force, National Defence University, Finnish Border Guard, as well as representatives from national veterans’ and national defence associations.

You can get a peek of modern military service by local divisions’ gear exhibits at Kansalaistori from 10 o’clock to 19 o’clock. Ruotuväki will also be present celebrating their 60 year anniversary. Snacks and treats are served by Sotilaskotiyhdistys Ry!

At 16 o’clock The Air Force Big Band plays the night’s first chords with Heikki Silvennoinen as their soloist. Silvennoinen is known for his blues guitarist and singer career in many bands since the 70’s, as well as his role in the 90’s Finnish hit show ”Kummeli”.

At 17 o’clock the night continues with a performance from The Guards Combo and the trio ”Souls of Women” by Emilia Vihanto, Iina Mutikainen and Klaara Koivunen. The trio brings an electrifying show ranging from the classics of soul music to the biggest hits of today: “It’s Raining Men” by the Weather Girls and “Think” from Aretha Franklin celebrate strong female artists and Bon Jovi medley as well as The Weeknd’s hit “Blinding Lights” energizes the audience.

At 18 o’clock the night ends with The Conscript Band of the Finnish Defence Forces’ Show Band. Starring around twenty conscripts, the show band will set the summer night on fire by playing the biggest pop and rap hits of today.