The Air Force Big Band, The Navy Big Band and Souls of Women, The Conscript Band of the Finnish Defence Forces’ Showband 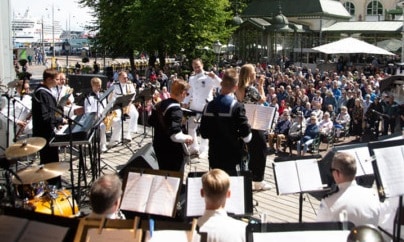 Military equipment from the Armoured Brigade is showcased from 16 o’clock onwards on the Lahti Harbour lakeside route. The National Voluntary Defence Training Association of Finland (MPK), the Finnish Police and the rescue department are also in attendance. The Soldier’s Home Association will be serving baked goods during the concert in Pikku-Vesijärvi Park.

At 18 o’clock The Air Force Big Band plays the night’s first chords  with Heikki Silvennoinen as their soloist. Silvennoinen is known for his remarkable blues guitarist and singer career in many bands since the 70’s, as well as his role in the 90’s Finnish hit show ”Kummeli”.

At 19 o’clock the night continues with a performance from The Navy Big Band and the trio ”Souls of Women” by Emilia Vihanto, Iina Mutikainen and Klaara Koivunen. The trio brings an electrifying show ranging from the classics of soul music to the biggest hits of today: “It’s Raining Men” by the Weather Girls and “Think” from Aretha Franklin celebrate strong female artists and Bon Jovi medley as well as The Weeknd’s hit “Blinding Lights” energizes the audience.